Good rumors in the online environment - Samsung and his Blockchain technology

Publicat de Valentin Slavu pe Thursday, May 09, 2019
According to some websites that brings news from Blockchain world, it seemed like South Korean tech giant Samsung is creating its own blockchain network and may be planning to issue its own crypto token. At this moment Samsung not confirmed this rumor officially. You can find more information by clicking on the below link Cointelegraph
In March, Samsung launched his new mobile phone Galaxy S10. The smartphone supports a number of DApps as well as featuring a Samsung crypto wallet supporting BTC, Ether and ERC20 tokens. This information is just a rumors and it's nothing official at the moment. What is known right now that are companies who make tests and want to implement Blockchain technology in their business model. Let's hope 👦 Samsung has same plans and these, rumors are as real as that.

CoinPot is a brand new cryptocurrency microwallet,designed to collect and combine faucet payouts and earning from a number of different faucets.Withdrawal options include:Faucet Hub( learn more about Faucet Hub-micropayment platform ),direct to your wallet via the blockchain,Faucet System and XAPO. Feautures . Combine earning from multiple faucets,so you can reach quick withdrawal threshold. Extra security for your fund(optional 2FA). Supports multiple currencies:bitcoin,dogecoin and litecoin(maybe more in the future). XAPO,Faucet Hub,Faucet System or direct withdrawal options to your wallet. Important to note that for security of your funds(bitcoin only for now),you need to link your wallet addresses Moon faucets to you CoinPot account,so the earnings are consolidated there and you benefit from the new features listed above.To do this you need to prove that you are the owner of the wallet address.This can be done by either signing a message,or sending a small deposit 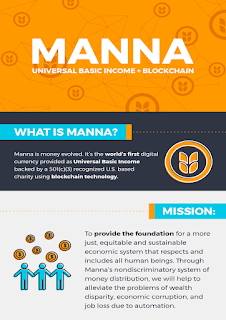 Mannabase is an online platform for the world's first Universal Basic income cryprocurrency.Manna coin is distributed by the people's currency foundation as a basic human right that everyoane in the world is eligibile to receive, for free. Click bere to join Registration is totally free and you can receive manna coins for free and joim the welfare revolution.Manna is distributed every week and they distribute 3,5% of the money supply.This is a way so they can flood the market with Manna coins. Mannabase The amount each users receives is based on the numbers of verified recepients and the curent circulating supply. If you don't have an account yet you can sign up here 🔛 Mannabase   Based on the similar technology as Bitcoin,sending Manna to the other users around the world is quickly and easy.Fee are extremely low,only a fracționa of $ cent and most transactions are confirmed in 1 to 2 minutes. For more info about technology,wallet,mining instructions and many